Back to top Portfolio

If you stood forty-one EMT 140 plates end to end, they’d stretch as long as the nave of Ely Cathedral. But, sound engineers take note, their combined reverb time wouldn’t even come close. As echoing ecclesiastical icons go, Ely is up there with the best and quite rightly engenders a hushed reverence in all who enter. Good job, too. You wouldn’t want any shouting.

As you can imagine, Christmas here has a rarefied bearing. Even the secular seasonal events are prim and polite, embroidered with prayer and properly associated with good causes. Like, for example, A Festival Of Carols, organised by The Cambridgeshire Freemasons in aid of East Anglia’s Children’s Hospices and featuring heartwarming turns by The Choristers & Gentlemen of Ely Cathedral Choir, guest soloist Laura Wright, yuletide readings and poems, and a children’s choir named, in a rare helping of jaunty mirth, The Ely Imps.

So apart from 20 or so very high voices, the sound reinforcement has to take account of a male choir, a piano and the euphonious Ms Wright. The cathedral organ is left to its own devices, of which there are many. On the whole, the mix is like trying to squeeze a hot-air balloon into a matchbox, so the choristers, gentlemen and ladies of Ely must have been very grateful that expert ministrations were on hand.

Based in Peterborough, B+H Sound Services was founded by MD Brian Hillson in 1987 with an initial focus on location recording. Live sound and general event support soon followed, however, as a natural adjunct to Hillson’s committed involvement in The Salvation Army and other religious organisations. As video and projection bolstered the inventory, bigger premises were secured and the recording business was sold on as a separate entity. Today the corporate events, concerts and worship proceedings are as varied as people and music can be, and the emphasis is on flexibility and scalability from small conferences to sweeping festivals.

Sam Lynam is business development and project manager, a role that has taken on extra significance since the acquisition of B&H by the SFL Group, the Reading-based full service rental company and now an approved d&b audiotechnik dealer in the UK. “That’s really opened a lot of doors and made my job a lot more effective,” Lynam says, adding that B&H is to retain its identity completely under the new deal and act as a new dimension to the group with recognised expertise in house-of-worship applications.

Not surprisingly, he and the team of Jamie Aston and Dan Bowater installed several d&b loudspeakers at Ely Cathedral to tackle the delicate job of delivering the programme to every seat in the house without setting o a tsunami of reverb around a building whose medieval stone is still vibrating from the squeak in Cromwell’s armour.

To this end several d&b Y10p and Y7p 2-way passive speakers were chosen, crucially powered by d&b’s D12 amplifiers with their onboard delay settings. “These speakers have a very narrow dispersion and they’re 14m apart, projecting very directly at the audience to avoid reflections,” explains Lynam. “They also blend in really well. For the delays we measure out to the front set of speakers and time-align to those, using the delay function in the D12s to convert the metres to milliseconds. I then walk the nave to listen myself, not just relying on the numbers, and I have the iPad app for the Yamaha QL1 mixer to adjust the levels.”

Further seating is provided for this concert across the transept and is served by two K-array KB1 portable line arrays owned by the Cathedral. “We sold a small system to the Cathedral for services and speech,” Lynam reveals, “but to deliver to the whole venue the high-quality vocal and piano accompaniment that Laura adds we needed much more. She specified a Shure UR2/SM58 transmitter with the UHF-R receiver, and on the piano there are two AKG C3000s – again to transfer as much direct sound as possible down the nave and suppress the reverberant waves. It’s not so much mixing as creative muting…”

A tiny patch of sound absorption is provided by the cloth ‘antependium’ that falls from the lectern, but it’s a small token: the gooseneck Shure Microflex has to be mounted on a boom stand as the lectern itself is a flimsy, foldaway wooden frame.

“We have to blend the natural acoustics of the organ with the choir, so we have four AKG SE300 B overheads with CK98 rifle capsules to give them that little boost – especially with an audience of 2,000. There are sightline issues too so, unusually, two of the overheads are at the side. It’s a typical cathedral: the curved stonework and the very high ceilings create a low-end rumble, so we have to be very careful what we’re pushing into it. A tiny amount of feedback will go a long way in here.”

In the end, Ely Cathedral proved the perfect echo chamber for B&H Sound’s crisp, dry delays – a use of natural resources alongside electro-acoustic artifice that EMT founder Wilhelm Franz would have appreciated fully.

How can we help? 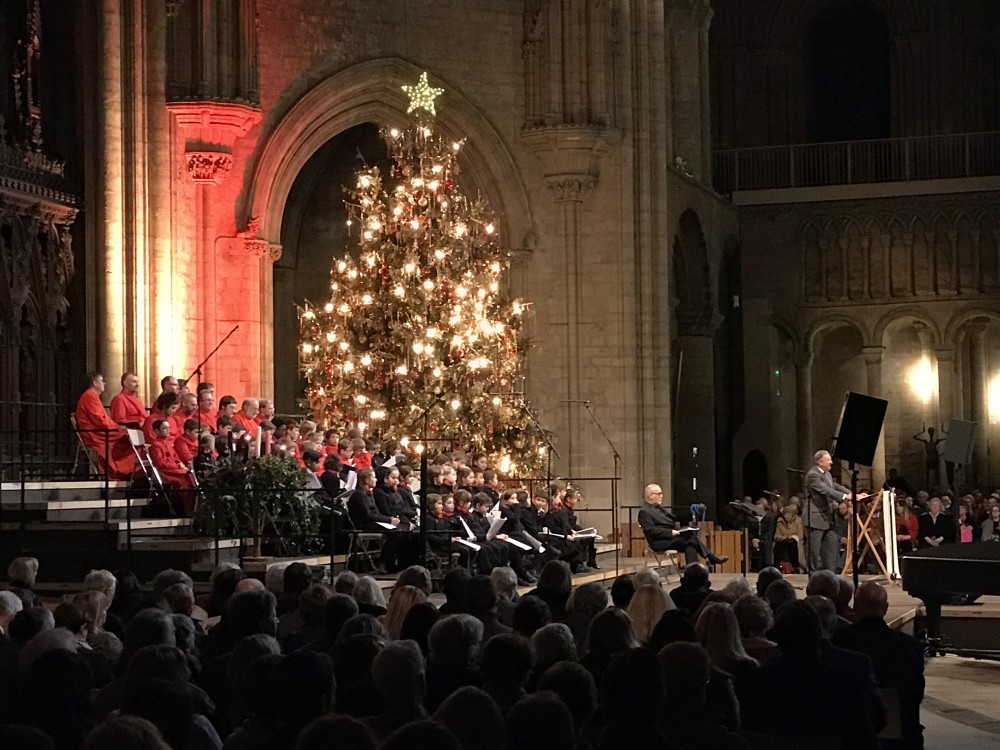 Learn more about our event solutions